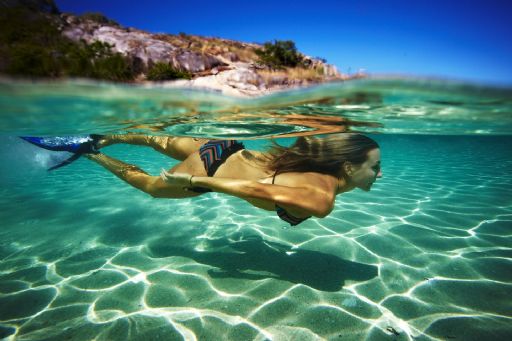 It’s the colours that hit you first. From 9000ft the iridescent aquamarine atolls and coral cays, fringed by ribbons of silky white surf, stretch out as far as the eye can see. It’s a vast, jaw-droppingly beautiful grand design, which makes flying over the Great Barrier Reef an experience almost spiritual.

I’m en-route to Lizard Island, 240km north of Cairns, to visit its iconic resort and find out more about an underwater survey soon to be undertaken there: one that promises to reveal the Great Barrier Reef’s beauty and fragility to millions – without them even having to get their toes wet.

The survey, sponsored by international insurance group Catlin, will visit Lizard Island and 19 other sites the length and breadth of the reef in the coming months. With Google as a partner, the expedition is not just another scientific survey. Data gathered will strengthen scientific understanding of how climate change continues to affect the reef and marine ecosystems like it, but at the project’s heart is the hope to engage people globally with the issues like never before.

It’s the application of new technologies developed with Google that is the game-changer for the survey. The expedition will use a specially developed camera to capture thousands of 360-degree underwater panoramas, which when stitched together and uploaded to Google’s servers allow users to choose a location, dip underwater and go for a virtual dive.

It’s Google’s Street View submerged, where with a swipe of your trackpad you’ll navigate through the world’s greatest aquarium: a virtual immersion in the earth’s most beautiful marine environment.

Richard Severs, founder of the not-for-profit Underwater Earth which conceived the survey, says that time is running out.

“Over the last 50 years our oceans have been in an unprecedented state of decline – half the world’s coral reefs have been lost and numbers of large fish have plummeted by 90 per cent.

“The oceans remain as they have always done, out of sight and out of mind,” says Severs. Set to bring the Great Barrier Reef and the global issues it raises to the attention of millions, the survey’s results are expected to surface on Google in late 2013.

The 1000-hectare national park that is Lizard Island happens to be the site of one of the world’s most exclusive and iconic luxury holiday destinations.

The chic design of its 40 suites and villas overlooking their own powdery white sand beach, provides a level of comfort that is equal to the world’s finest hotels, but it’s not about ‘bling’ – rather something much more organic and nourishing.

If you want the resort’s ultimate experience book the most isolated villa: the Pavilion. Beloved of British royals, it is for those who want the highest level of isolation and exclusive pampering.

Because of Lizard Island’s isolated northerly location, the resort offers dive trips to parts of the reef that most operators on the mainland can’t reach. Other draw cards include canoeing, sailing, some of the best fishing in the world, a spa and gym, and nature walks, to follow in the footsteps of explorer James Cook who scaled the island’s highest peak in 1770.

More modest adventurers can take a motorised dingy for the day, with a sumptuous picnic hamper, to find their very own perfect tropical beach. Before lunch, with mask, snorkel and fins attached, a few gentle strokes will take you to the dazzling coral; above ancient giant clams and electric blue starfish, to swim with lifeforms so colourful and miraculous, it makes your heart sing. Google viewers are going to have a rare treat when street view goes under water.